N/N hwsd, DNA confirmed Bay. She is thick, stout, wide in stature with a pedigree is full of noteworthy foundation stallions and mares. Canal
1. Laurinston won Clifton stallion class. Extensive competition record especially in Eventing. Imported from Ireland.
2. Ballinaboy Eamonn won Clifton stallion class 2 years before being imported. Extensive competition record and won ACPS Golden Medallion in Eventing, jumpers, hunter, dressage and halter and awarded golden shamrock award. Imported from Ireland
3. Frederiksminde Marion won extension awards for type, n halter and performance
4. Pattys Etoile de Paris Imported from Germany as a yearling, he stood for a short time in the US before relocating to Canada. Now, we are very excited to have him back in the US.
All stout substantial ponies. Most of them including his mom have 9” bone
She has a 2022 full sibling available that is due first of May 2022. 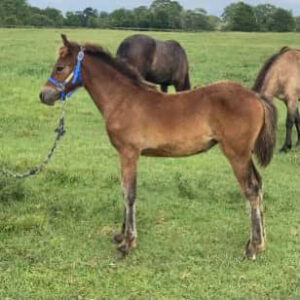