Kynynmont Ciara is proudly offered for sale as a broodmare and is likely to produce very competitive dressage offspring as well as competitive eventers or jumpers. This 2014 ¾ Connemara, standing at 15.1, had her promising riding career cut short after an unfortunate pasture injury in 2020. Now back on turnout and healthy, Ciara is ready to be an asset to your breeding program!
Ciara is an attractive black/dark brown mare with a scopey trot and canter and an excellent walk. In September 2019 at her first and only recognized competition Ciara earned scores at TR 2 & TR 3 of 68.62, 67.58 and 64.65, and at 1st 1 of 66.89.
Ciara is out of the same Dam as Kynynmont Gunsmoke’s Gideon, who debuted at Grand Prix at just 10 years-old, and campaigned successfully in CDI Grand Prix under trainer J. J. Tate. That dam is Kynynmont Tara (1/2 Connemara, ¼ Canadian Warmblood, ¼ Thoroughbred). Tara is by the Connemara stallion Greystone McErrill, producer of top sports horses in the driving and eventing world. Tara’s dam is Irish Rose, by the Canadian Warmblood stallion Greystone John Patrick (who may have some Connemara lineage) and out of a Thoroughbred mare.
Furthermore, Gideon’s sire, *Gun Smoke, is Ciara’s Grandsire. Ciara is by the purebred Connemara pony stallion Kynynmont Cooper O’Grady, by *Gun Smoke. *Gun Smoke is a powerful and athletic stallion, magnificent jumper, and has produced outstanding dressage prospects, including Gideon (International GP) and Cooper (competing nationally through Intermediare I and is schooling the Grand Prix). Cooper is out of Kynynmont Moira (by Ballywhim Sterling Moss), a dam known for passing her lovely temperament on to her foals.
This excellent broodmare prospect is priced at $10, 000. Please contact Jessie Paine directly to learn more about Kynynmont Ciara and the other horses and ponies available at Kynynmont Connemaras. Due to reception issues, texting is the best way to initially contact Jessie at 216-509-2335. 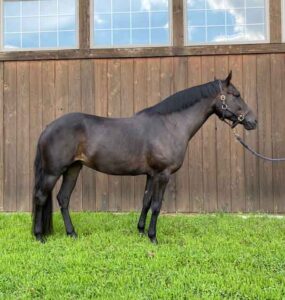