Lexington, VA:  On the weekend of August 22, Region III of the ACPS held its 29th annual show.  For most of those 29 years the show was held at Glenwood Park  in Middleburg, Va,  but for the past three years it has been at the Virginia Horse Center in Lexington, a venue that has received rave reviews. The weather, as in the past two years, was beautiful.  There were the usual in hand and performance classes for Connemaras and Mountain and Moorland Ponies, as well as a trail class that took place at the highest point of the horse center, offering beautiful views in addition to a variety of natural and unnatural obstacles to navigate.  There was also a costume class, games classes, and for the third year in a row, the 6-membered Balmullo Farm Quadrille doing their dressage test.

The in-hand judge was the cheerful Christina Kiem, who, after the top presenters of the foal class, the stallions and geldings class and the two mares classes all gathered for the Championship class, pronounced Seafield Ruby, owned by  Michael Keane of Florida, the Best Connemara of the day.  Micheal Keane also had the winner of the yearling futurity, Seafield Dangan Nora.   Sparrows Owen was the Best Half bred of the day.  Ruby is an imported mare from Ireland by Banks Timber, while Owen is by the well-known Grange Finn Sparrow out of a QH mare.    He is owned by Megan Buchanan Harris.    Ruby was also the Champion Connemara at the Midwest Connemara Breeder’s show in July…..  so she is not only an international traveler but is well travelled in the US as well…and a judge’s favorite.

The Swan class is always interesting.  This is a class for ponies who were entered in previous years’ Yearling Futurities that did NOT win.  The idea is to see which ‘ugly ducklings’ have turned into swans!  This year’s winner was Aluinn Dixie Gold, bred and owned by Catherine Mack.  Dixie is a striking palamino by Tre Awain Goldsmith.

In the dressage division, the High Score Senior was Anne Schmid  riding Gallo’s Heavenly Breeze with a 73.64%  and the High Score Junior was Summer Fraughnaugh, riding Balmullo’s Liffey Lad with a 69.38%. The dressage judge was Nancy Lowey.

The costume class was, as usual, eye –popping!  There were princesses, a gaggle of Irish fox-hunting fairies, a one-man Mardi Gras, and last week’s “Can You Guess”, Fifty Shades of Grey, Kim Harrison’s gray pony with a big 50 painted on its side.   There was also a whole art museum, the Balmullo Museum of Fine Art, that featured Picasso, Mondrian, Georgia OKeefe, Frieda Khaloe, and Any Wharhol each exhibiting one of their paintings which were painted on the sides of their ponies! 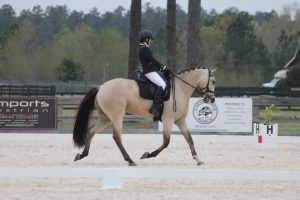 What a wonderful weekend for Connemaras competing at Ocala II HT at the Florida Horse Park it was! Congrats to all the ponies and their 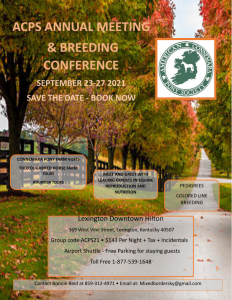