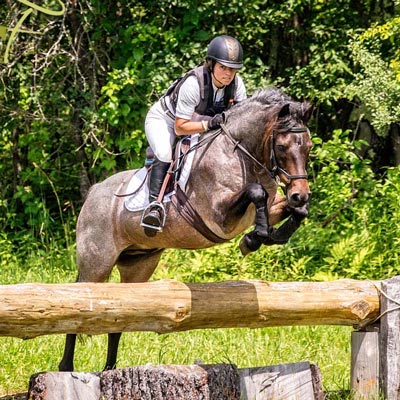 The path that led me to the connemara pony was by pure circumstantial chance or luck. As a gutsy 11yo in search of an event pony my parents were told of a connemara pony that was for sale. McKeever a *Texas Hope son had the reputation of being a tough ride. My parents not knowing a thing about horses or ponies bought him for my 11th birthday present. McKeever was tough but he taught me what it was like gallop and big fence, get through a dressage test, impress in stadium and clean up at any jumper show. I evented him for several years and then he went on to teach Charlotte Reed’s granddaughter Bekki to event. After McKeever I stepped up the eventing ladder riding Thoroughbreds and Thoroughbred crosses. After many years of that I decided it was time to go back to the pony. As more luck would have it I discovered my cousin was Catherine Mack. So, I bought 2 connemaras from her and the best days of my horse life began.

In 2006 my breeding career began with the stallion Aluinn Durango. With the decision to breed came the decision to become and ACPS inspector. I became an inspector shortly thereafter and have been inspecting yearly ever since. Being raised in a family where Welsh Corgi’s were bred, Welsh Cob’s were bred and registered Nubian goats, spotting a well put together, athletic horse came quite naturally.

I have been honored to judge in 3 Regions in the last 3 years and currently serve on the BOG. I am dedicated to maintaining the breed by breeding conformationally correct, athletic, and willing minded ponies that everyone would be happy to ride.

I am currently grooming the next generation, my daughter. She is involved in the whole process from presenting a pony for inspections to handling a pony in an in-hand class and tactfully riding. The best is yet to come.