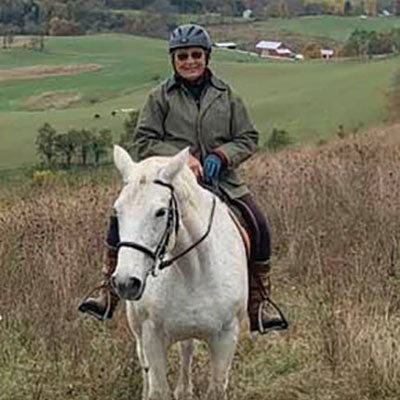 The Eyles family seems to have been chosen by the Connemara breed for a lifetime of devotion. When a breed of equine suits your family’s needs, it’s best to stick with a good thing. That’s pretty much what all of the Eyles have done since the 1980s.

Trips to Ireland and meeting Connemara breeders there, attending shows, and visiting farms further cemented the love of the breed. With that background, it stood to reason when the ACPS spent 10 years planning, meeting, discussing, and finally implementing an Inspection program, Marynell Eyles was already a part of it. As one of the cores of the organizing group, even though the program wasn’t popular in its infancy, Marynell did believe in it, and in the educational aspects of the whole “scheme” as the Irish would label it!

A rider for most all of her life, with children in the US Pony Club, and functioning as a DistrictCommissioner of several Pony Clubs, she knew that reliable mounts who could do the “all-around” job for a young rider were not easy to find. Marynell also was lucky in that her home was just a short walk from Aladdin Connemaras, owned by Catherine Mack, in The Plains. There she was a willing observer of all the Connemara population in that part of Virginia. Having come from military family life, with lots of posts in the Midwest, the Connemara was not at the top of the breed list in Marynell’s head. It didn’t take long for that to change.

From those beginnings in The Plains, through building Top of the Ridge Connemaras, and standing numerous stallions, breeding uncounted mares, and producing many riding ponies, the Inspectionprogram figured highly in value to her. You just can’t get enough education!

Since Marynell was also the Registrar for the Society, it made sense that the “office help” would act as secretary at the early tours of the Inspection program. Re-doing the report forms and the paperwork became her usual duty after each learning experience… the group kept their minds open and with each new educational opportunity, the form would reflect another important confirmation notation.

When the travel became too extensive, Marynell stepped down from the assignment of secretary. The paperwork is still collected in the office, and the lists and charts, and report forms are still updated frequently. And, she is still a firm believer in the program and its value to breeders, owners, and riders.