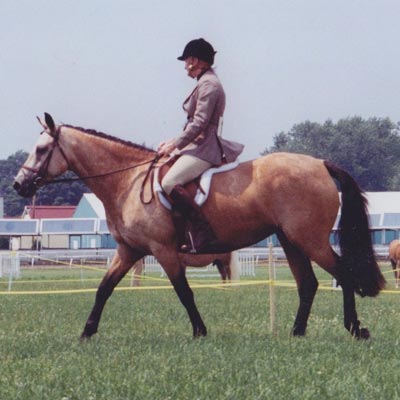 I began my love affair with Connemaras at the age of nine, from photos in English pony books whose breed descriptions routinely featured Terese of Leam and Silver Lining. Photos of *Tooreen Laddie and his daughter Erin Heaven in The Chronicle of the Horse in the early 60’s pretty much sealed the deal.

My first Connemara, bought from Sue Smith at Gilnocky Farm in 1976, was Gilnocky Chantilly Lace (aka Mattie; Gilnocky Mullingar x Gay Corrib, by Texas Hope). She was exactly what a Connemara is not supposed to be: hot, sensitive, opinionated, & just like a beautiful small Thoroughbred. We were perfect for each other. I thought she would be my competition pony & Greenway Pollyanna (Far Above’s Shannon x Gaelin’s Bit of Heaven, by *Gael Linn), who did look like a Connemara, would be my broodmare. Wrong.

Pat Lyne, friend & mentor, had sold the wonderful young buckskin *Chiltern Colm (Corrib x Chiltern Gazelle, by Island Duke) to Sally Green, meanwhile. I thought him perfect for Mattie, & Bob Butcher & I were able to lease & then buy him. So began Wintervale Farm.

Although no longer actively breeding, we still have five Connemaras: a daughter, two granddaughters, & a great-granddaughter of Mattie & Colm, plus Morning Glory’s Illyushin (Fiddlers Glory Boy x Tullymors Lizzie MacLynch, by Montully’s Son), the sire of the younger generation, which, by the way, are descendants of *Tooreen Laddie, Silver Lining’s full sister Canrower Lass, & Terese of Leam. Full circle.

Somewhere in there I created & edited Connemara Country (the first-ever national Connemara magazine), have served as a Regional Chair & on the ACPS Board of Governors, was an early inspector, have judged in the U.S., inspected in Canada, am still a writer and theatre professional by trade, & live in NH with Bob.