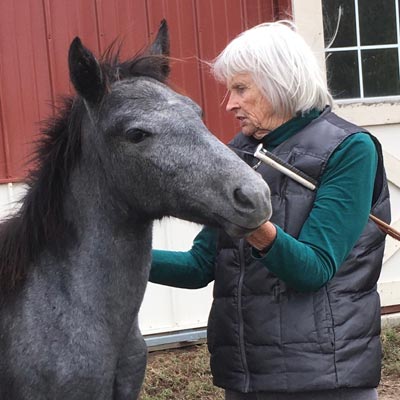 I began raising connemaras over 35 years ago when a 2-year-old Arabian gelding (sold to her by a very aggressive salesperson who, try as Donna might, she has been unable to emulate) proved to be unsuitable for her young son.

Enter Speckles, sweetest pony to ever inhabit the Earth. Speckles was a purebred Connemara found lurking in the classified ad section of the Gainesville ( Florida) Sun. She was from Rose Hill Farm in Georgia by the imported stallion, Marconi. Speckles began a fascination (or was it an obsession?) with populating the world with Connemara ponies.

Her first foal was by a TB stallion. This was Amazing Grace who, in an astounding example of her breeder’s beginner’s luck, won the McKenna Award from the ACPS.

Speckles went on to produce several purebreds by Concord River Roaringwater Bay, newly acquired stallion. And of course, the rest is history! Speckles was followed by a dozen or so mares who produced many wonderful ponies sired by Roaringwater Bay.

The production of ideal all-round ponies led to my interest in the relation of form and function in equines and so I arranged the first-ever ACPS clinic on conformation. Attendees at this clinic later formed the nucleus of an Inspection Committee charged with organizing pony inspections in the United States,  with many participants later becoming inspectors.

In 2010, I moved to Virginia where I continued raising ponies, albeit on a smaller scale than at the Florida Farm.

After Roary died at age 34, he was replaced by Foothills Field Marshall aka Bruiser, a supremely talented eventing stallion who has taken over stud duties for the farm all while performing amazing jumping feats to the delight of his many fans.

The Virginia iteration of Balmullo Farm still has one foal/year and also gives lessons to children and conducts summer camps, all on Connemara ponies.  A highlight of the year is when 6-8 of these student child/pony pairs perform a dressage quadrille at the Region 3 show.

My favorite things are now grandchildren, one of which is an accomplished rider, dogs, watching the riding students grow into competent and fun-loving riders, and seeing the foals grow into those super all-round ponies