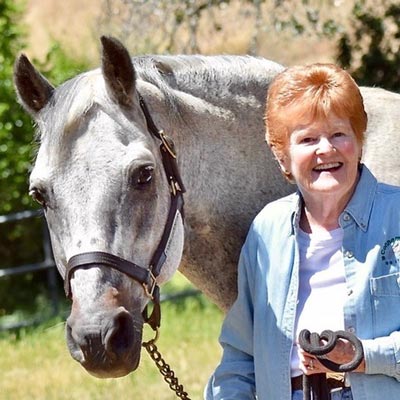 I “met” my first Connemara in 1974—a purebred Connemara stallion, ridden by an eight-year-old girl in a low-key, rural, children’s schooling show! It was a fascinating experience to behold! Never was he anything but a gentleman, even when other beginning riders, mounted on “school horses,” chanced to come well into his space. It was that day that I decided to learn more about the Connemara Pony because of three aspiring young riders in our “Navy” family—five, eight and ten—already working toward their individual goals in competitive riding.

In 1978, shortly after my husband’s retirement from the submarine force, we bought a 27-acre, “potential,” breeding farm, two-and-a-half miles from the USET West Coast Training site, Wild Horse Valley Ranch, Napa, California. There, our three children began their riding careers in the early 70’s. In 1979, I purchased “a half interest” in my first purebred Connemara Pony mare! We were off!

Our purebred foundation breeding stock came from two breeders and a pony owner. Ultimately, from breeder, Sally Green, Balius Farm, Glen Ellen, CA, I bought outright the mature mare, “Oak Hills Wee Bit ‘O Heather.” The second mature mare I purchased, “Balius Kerry Blue,” was bred by Sally, but at the time of my purchase, she was owned by Mrs. Sammy Hagar, an ACPS Life Member living in northern California. “Kerry” was a daughter of Sally’s saintly, handsome, bay stallion, “Gilnocky Drumcliffe,” who had introduced me to Connemaras in 1974! Our third foundation mare, a dark dun weanling, “Tower Hills Eoghan,” was purchased from Mary and Rogers Rutter, Tower Hills Farm, NH. Our “fourth and final” broodmare prospect was “Balius Golden Piper,” purchased from Sally Green, in utero, “if a filly!” Thus, “Stonybrook Connemaras” was on the map!

In the early years of our breeding program, I bred our mares to outside stallions. In the late 80’s, we were asked by Marianne Alexander, New York’s “Greystone Farm,” to provide a temporary West Coast home for the well-known breeding and performance stallion, “Hideaway’s Greystone Alex,” until he was sold and returned to the East Coast for his final years. Alex was another kind and intelligent, “perfect gentleman” stallion who we quickly appreciated because of his lovely temperament and easy management. In handling Alex, and because of my childhood background of living on a farm, riding and handling horses, I made a confident decision to look for and locate a breeding stallion for Stonybrook Connemaras! What fun I had, researching Connemara Pony bloodlines, stimulating my interest in purchasing a well-bred colt. I “caught on fire” with the idea of finding a yearling stallion prospect from Ireland, with a pedigree featuring a strong mare line, so important to producing consistent, athletic, Connemara Pony type. My goal was to breed “purebred Connemara Ponies capable of competing successfully in open competition, in all disciplines, with all breeds.”

In 1991, daughters Lee and Julie, accompanied me to Ireland to see two yearling colts that “fit the bill.” We saw both of them “at liberty,” after which I made a pre-show, purchase price offer for the colt eventually named, “*Canal Laurinston,” in honor of his renowned dam, “Village Laura.” The complete story of that trip is too long to tell here, but we actually concluded that trip with a second purchase by the two sisters—a weanling colt foal we named “*Kingstown Joe,” in recognition of his well-known breeder, Joe Gorham, the Kingstown Stud.

The ensuing years flew by in our thirty-five years of breeding purebred Connemara Ponies, (and one Connemara Halfbred!).  I became a solid supporter of the ACPS, flying to most Annual Meetings, serving on the Board of Governors and many committees, managing our breeding program, and Co-Chairing the ACPS-sponsored Blue-Eyed Cream Study in 2000.

In 1994, after a great deal of research, the ACPS Board of Governors voted to initiate inspections of American Connemara Pony breeding stock in accordance with the rules and procedures of the International Committee of Connemara Pony Societies, (ICCPS). With other ACPS Region X members, I hosted one of the two California “first off” inspections. The make-up of that initial Inspection Team, which covered inspection sites across the country, included two CPBS officers/certified inspectors, Mr. Eamonn Hannon and Mr. Dermot Power. Longtime ACPS members and American Connemara Pony breeders, Catherine Mack, Anne Frey, Mary Rutter and Marynell Eyles* were also a part of that first Inspection Team.

I believe in the Inspection process. Before achieving the status of “Inspector,” I traveled across the country as an Inspector Candidate, (IC), with our American Inspection Teams, and also accompanied Ireland’s CPBS Inspectors a number of times on their Inspection Tours in order to “sharpen my eye,” before becoming an ACPS Inspector. Inspections are a valuable educational tool for preserving the admirable and recognizable characteristics of the Connemaras Pony. Inspectors, working as part of a team, do their best to make each individual pony inspection a procedure that is friendly, fair to every pony and helpful to the pony owner.